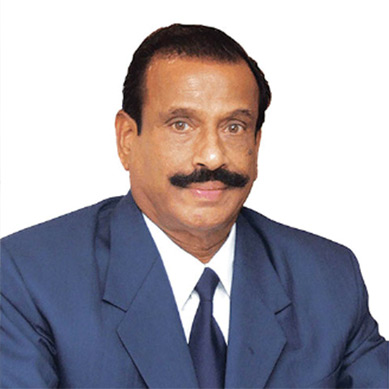 Whenever we hear the name Nehru College immediately the name of our Chairman late P.K.Das comes to our mind. Our Chairman's name is synonymous with Nehru Colleges. Which stand as Hall Mark of Quality in the field of Higher Education. Starting from scratch in 1968, this great leader, spent each ounce of his energy and sweat to establish 12 prestigious institutions in Tamil Nadu and Kerala. Through his hard toil, sweat, firm determination and strict self discipline, he established Nehru College of Aeronautics and Applied Sciences at Kuniamuthur, Coimbatore in 1968. Besides this college, he established four engineering colleges, one Arts & Science college, one Pharmacy College, one Aviation Institute and one Super Speciality Hospital and three Management Colleges in Tamil Nadu and Kerala. He was hardly 29 years of age in 1986, when he started his career as Academician at Coimbatore.

The meteoric rise of this great personality in the field of technical and higher education was phenomenal and great. A humble begining was made. Despite innumerable difficulties and insurmountable obstacles he had to face with, he did't budge an inch, but forged ahead with firm determination and iorn will, to accomplish success after success. Year after year, he was reaping rich dividends and accolades. He was standing like Colossus.. The flag ship institution namely Nehru College of Aeronautics and Applied Sciences, has emerged as a unique in this country. This college is the only one with so many specializations in Aeronautical Maintanance Engineering. In the field of Applied Sciences, several branches for B.Sc degree courses in Aeronautical Engineering, Electronics, Computer Science and Avionincs and MBA in Air Line and Airport Management were started there. The quality maintained here speaks volumes about the Founder Chairman late P.K.Das.

He added golden feather to his cap, by starting a huge and prestigious Nehru College of Arts and Science in a new campus at Thirumalayampalayam. There are two Engineering Colleges at Thirumalayampalayam and Kaliapuram, in the outskirts of Coimbcatore. At Pambadi in Kerala, He started Nehru College of Engineering and Research Center and later on Nehru College of Pharmacy. At Lakkidi in Palakkad District, he started Jawaharlal College of Engineering And Technology. In 2010, Jawaharlal Aviation Institute was started at Lakkidi. A super Speciality Hospital named as P.K.Das Institute of Madical Sciences has been established at Vaniyamkulam. All these have been conceived and nurtured under his close suervision. The efficient functioning and quality maintained in these institutions are testimonies to his diligence, greatness and success.

Though he left us, aboput a year back, he has groomed his sons Adv.P.Krishnadas, the present Managing Trustee and Dr.P.Krishnakumar,CEO & Secretary, Nehru Group of Institutions at Coimbatore in to succcessful academicians and administrators. They have taken over the reins of administration of these institutions in an admirable mannaer. The Chairman had foreseen the birth of a great University in the name of Jawaharlal Nehru University. The might and strength of our beloved Chairman are etched deeply and are eloquently evident from the functioning of these institutions. He was a simple, humple, noble and straight forward person, with aristrocratic behavioral traits. He was a tall, handsome and commanding personality not only physically, nut also intellectually and behaviorally.